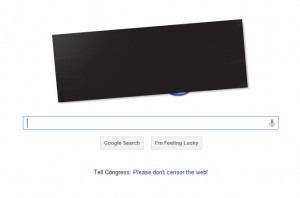 You may be wondering what happened to Wikipedia today (January 18, 2012) or where the Google doodle went. Or perhaps you noticed nothing amiss because you’re a small business owner and are busy trying to make a living!

Whatever the case, Wikipedia and many other websites have “gone black” in protest over the proposed Stop Online Piracy Act (SOPA) and the Protect IP ACT (PIPA). Google’s doodle was hidden in support of the protest.

“SOPA, the House of Representative’s version, and PIPA, its Senate counterpart, target foreign websites that intentionally steal copyrighted material and intellectual property for their own profits. The bills are strongly backed by the U.S. film and recording industries.

Legislation already enacted — the Digital Millenium Copyright Act — protects intellectual property and provides for that content to be removed from sites when its use is unauthorized. SOPA and PIPA are different in that they would allow the government to punish sites that publish the unauthorized content.”

Read the whole article from FoxBusiness.com

What does this mean for us?

Well, as a web marketer, I advise all my clients to create content and share it widely and generously for there is no profit in being a well kept secret.

But what happens if, in your honest and earnest attempt to educate your readers, you inadvertently link to a site with any links to any material that infringes on copyrights? Your site could be shut down if this legislation goes through.

Small business owners’ edge is their size and nimbleness. But if they need a team of lawyers to make sure they are not held liable for the actions of a foreign website not only do they lose their ability to act quickly but the very act of running a business online becomes cost-prohibitive.

Internet piracy is a very real threat, and I recognize the need for music and entertainment companies (the primary backers of this legislation) to protect their material from illegal downloads. However, many feel the language of the bills is far too broad and threatens legitimate business conduct as well as acts of piracy.

Here’s a great primer from The Guardian.

As this debate rages on can anyone really believe that the politicians and corporate backers of this bill are concerned with the concerns of the small business owner? Only if we make them.

Here's What Others Are Reading.